Upgrading from Ubuntu 19.10 to Ubuntu 20.04 with the Graphic Update Manager

First open an update program (also called update-manager) from the menu of your application. It updates the information on the software. If updates are available, click Install now and enter a password to install the updates.

If a new version of the Linux kernel is installed, the update manager will warn you that you need to restart your computer. Click on Restart.

Then open the terminal window and execute the following command.

After checking for updates, the update manager will inform you that Ubuntu 20.04 is now available. Click on the Upgrade button. 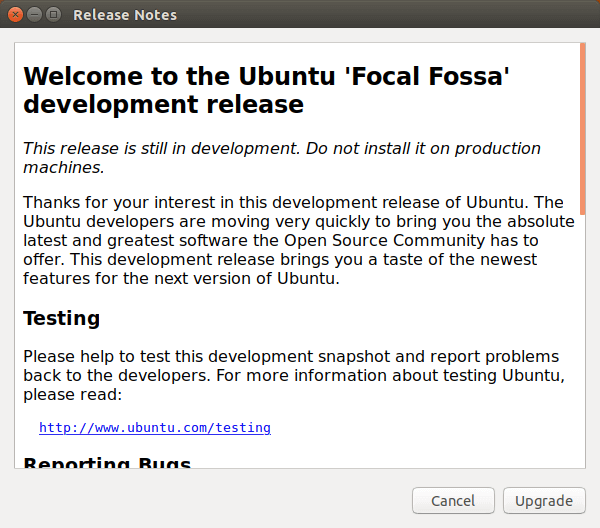 The distribution update window opens. If you have received a notification that certain third party sources have been disabled, please accept them. You can reactivate it once the update is complete. 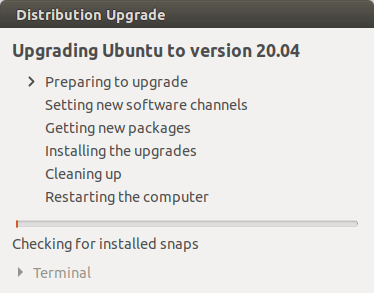 Within a few minutes you will be asked if you want to start an update. Click on the Start Upgrade button. 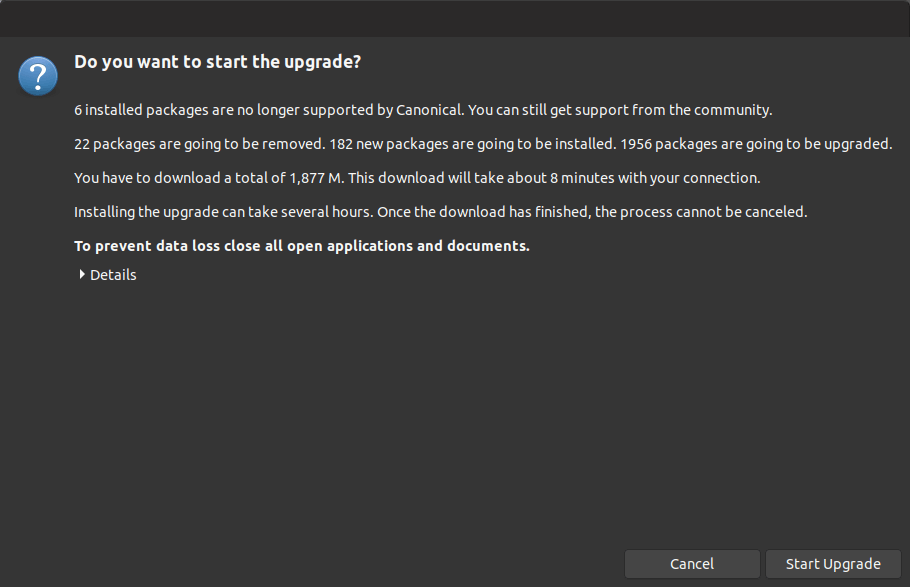 Wait until the update process is complete. The update manager may ask you to restart services when updating packages without asking you to do so. Tick the box and click Next.

After the installation of new versions of packages, the service manager may ask you to remove obsolete packages. I always choose to delete.

Outdated packages are software whose name is not in the software repository of the new version of Ubuntu. The reason for these obsolete packages is as follows:

After removing outdated packages from your system. Reboot your computer and check the version of Ubuntu with the following command.

You can use the command line to update the Ubuntu desktop or headless server. If you are using SSH to connect to your Ubuntu server, it is a good idea to back up your OpenSSH session by adding the following line to /etc/ssh/sshd_config on your server

Save the file and close it. Then restart the SSH daemon.

Make sure you have installed the basic package of Update Manager.

Then execute the following command to start the update process.

Then follow the on-screen instructions to upgrade to Ubuntu 20.04. In principle, you should be encouraged to answer the questions.

When you update the server, you will probably see the messages as shown below. I recommend selecting N to save the current version. The updated version will be available in the same directory. You can see it later.

Once the upgrade is complete, restart your desktop computer or Ubuntu server. To check your version of Ubuntu, run it:

How to restart third-party deposits

Third party repositories are defined in the .list files in /etc/apt/sources.list.d/. First, activate the third-party repositories with the following command, deleting the # character in lines beginning with deb.

Then change all copies of eoan into focus.

Some third party warehouses do not have an entry for Ubuntu 20.04, so you will probably see these errors:

E : There is no release file in the repository http://linux.dropbox.com/ubuntu focal release.
N : Updating from such a repository cannot be done safely, so it is disabled by default.
N : See the apt-secure(8) manual for information on creating a repository and the user configuration.

You must edit and disable these archive files one by one. For example, I’m editing the dropbox file.

Deactivate this archive by adding a # at the beginning of a line.

Save the file and close it. We have to wait for the opening of these depots on April 20th. Add the Ubuntu support. Some software packages in third-party warehouses may be included in 20.04. For example, the Ubuntu 20.04 repository contains the Nextcloud desktop package, so I don’t need the Nextcloud APP anymore. I can suppress the next PPA cloud.